Blog & News: How Much Is Your Leaky Faucet Costing You?

How Much Is Your Leaky Faucet Costing You? On average, a leaking faucet will cost around $20 per month. A leaky toilet, another common example, is around $150 per month on average!

The United States Geological Survey has a comprehensive drip calculator designed to give you an estimate of how much water you are wasting annually due to plumbing leaks. So:

Say you have a relatively slow-dripping faucet – a typical rate of 10 drips per minute – then you’re wasting three liters of water per day. That is 90 liters per month, or 347 gallons of water each year.

So, we’ve explored how many gallons per year you’re losing due to a simple leaking faucet. Now, let’s break it down into terms of dollar and cents. This is your money, after all. You’ve got a lot to lose from a leaky faucet.


On average, a leaking faucet will cost around $20 per month. Now, that does not seem like much in the overall scheme of things. However, it can quickly add up. If you have more than one leak, that cost is going to double, triple, and even quadruple. For example, a small crack or pinhole-sized leak in your plumbing pipe can cost upwards of $600 per month. A leaky toilet, another common example, is around $150 per month on average. As you can see, the total wasted each month appears worse when you look at the dollar amount than just the gallons of water per month. 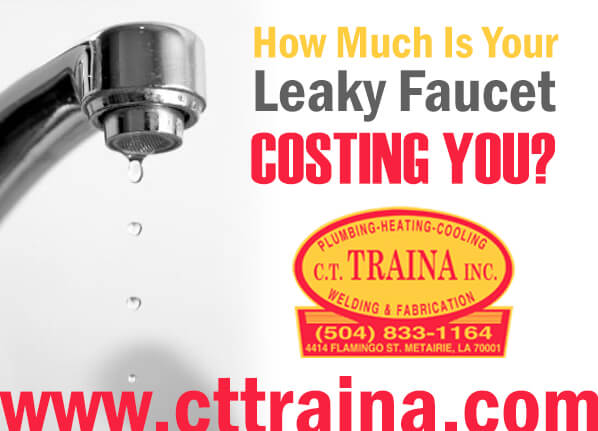 "Top notch service from the minute I emailed my plumbing request to quick, next day service...

"Your Company is the best Air Condition company around!...

"I have been their costumer for years to service my office and my house. I have no complaints. I am so satisfied...

Have a Question? Send Us a Message

You call, we respond” we pride ourselves on timely response to our clients and exceptional quality and service. Let one of our professional plumbing, air condition, welding, or sewer and drain experts help you today! Contact Us Now!

We love our customers and we are proud to be your local plumber and air condition specialist.

Over 60+ Years of Experience

With over 60+ years of experience in the plumbing and a/c industry, you can count on CT Traina.

"Quality is what makes us stand apart"

we pride ourselves on timely response to our clients and exceptional quality and service.

We are always offering coupons and specials on air conditioning, welding, fabrication, sewer drain cleaning and all plumbing services.